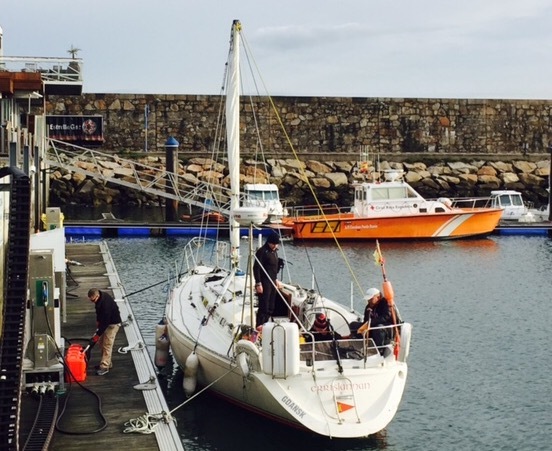 Last October Sigma 38 Errislannan, owned by ocean yacht master Agnieszka Schramm-Newth (Agi), was dismasted off La Coruña, North Spain. Once Errislannan was safely back in port one of Agi's first calls was to the Sigma 38 Class Association to find a replacement mast. The Class Association is the only source of the one design masts, available only to class members through a special relationship with Allspars, the suppliers.

Agi runs Errislannan as a RYA training school and never one to back away from a challenge rather than having the mast delivered to La Coruña she opted to sail under jury rig to the mast in Cowes. The jury rig was built from the boom and the spinnaker pole using existing lines and blocks and they hoisted laser sails. Having studied the weather patterns the crew left on 19th February with forecasted southwesterly winds and swell. As Agi says they "planned to the maximum and anticipated the minimum of luck". Off Briest instead of the forecasted westerlies, wet and strong easterly winds made for unpleasant sailing and probably the worst point in the crossing.

The 530 nautical mile trip took seven days. A respectable time considering they spent nearly a whole day waiting for the tide to turn at the Needles. Arriving on a rare sunny day this enjoyable time was spent drifting, sunbathing, and using the opportunity to practice tidal calculations. The crew have declared that day and the fabulous spaghetti supper the best moments of the trip. Errislannan is now safely in Cowes Yacht Haven awaiting her mast